On MLK Day, Reflecting on Bipartisan Support for Voting Rights 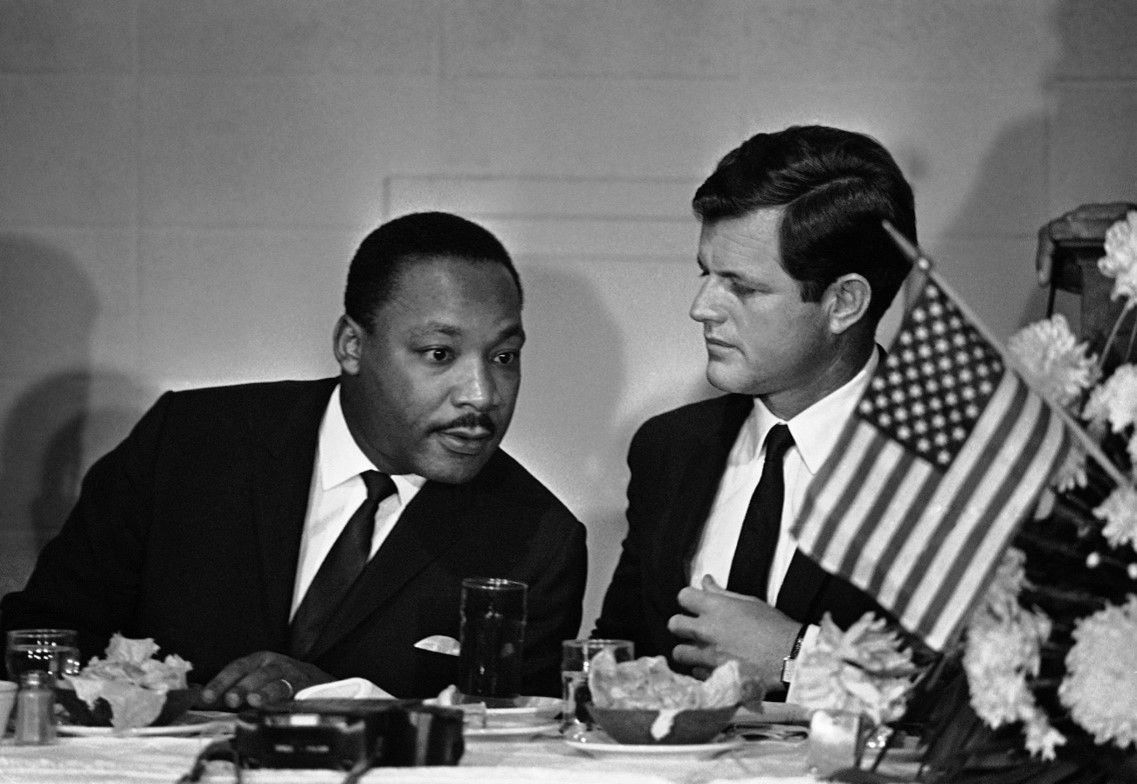 “So long as I do not firmly and irrevocably possess the right to vote I do not possess myself. I cannot make up my mind — it is made up for me. I cannot live as a democratic citizen, observing the laws I have helped to enact — I can only submit to the edict of others.” – Martin Luther King, Jr. speech given before the Lincoln Memorial at the March on Washington, May 17, 1957

“We must end the continuing blatant discrimination in our voting laws. If I could, I would lock every door in the Supreme Court but one and require all nine justices to enter every morning through the majestic main door above which are inscribed in marble the four simple, basic words that are the foundation of America and always will be: ‘Equal Justice Under Law.’ Because when we say ‘all,’ we must mean ‘all.'” – Senator Edward M. Kennedy’s remarks on MLK Day Holiday, Peoples Congregational United Church of Christ, January 14, 2001

As the Kennedy Institute honors the Rev. Dr. Martin Luther King Jr. on MLK Day, we also reflect on Senator Kennedy’s longstanding commitment to securing voting rights, and his legacy of doing so through steadfast, bipartisan support. It is our mission to educate and inspire the public about the importance of participatory democracy, civil discourse, and inspiring the next generation to engage in the civic life of their communities – staples of democracy that begin with every American citizen’s right to cast their vote and advocate for equal representation.

America’s long and sometimes troubling history with voting rights is the subject of the Kennedy Institute’s newest in-person exhibit: “Standing Up For Democracy.” The exhibit highlights the work that Senator Ted Kennedy and his colleagues invested over the decades to ensure that everyone’s democratic voice is heard. On his maiden speech on the floor of the United States Senate, Senator Ted Kennedy urged support for the landmark Civil Rights Act of 1964: “Our appeal to the American people is this: Seek a reign of justice in which voting rights and equal protection of the law will everywhere be enjoyed… This is not a political issue. It is a moral issue, to be resolved through political means.”

Whether he was fighting to abolish the poll tax, lower the federal voting age to 18 years old, or make sure that citizens of all abilities and backgrounds have access to the polls, Senator Kennedy played a significant role in each Voting Rights Act reauthorization to date. However, serious threats to the voting rights of millions of Americans are sadly not a thing of the past. The exhibit also draws attention to these current challenges, whether that be access to the polls, barriers to voting, or unfair districting, and spotlights those individuals and organizations who are making a difference today.

The Kennedy Institute has been closely tracking the issues of voting rights legislation on the state and federal level and sharing up-to-date news from around the country on our JustVote.org website. We invite you to visit that page for updates on voting rights legislation, insights into the future of filibuster, and other voting news across the United States.

The life and legacy of Martin Luther King Jr. is close to heart of the Kennedy Institute leadership, as the son of the iconic civil rights leader, Martin Luther King III, joined the Kennedy Institute’s board in 2020. Martin Luther King III has been advocating for the passage of federal voting rights legislation to protect millions of voters across the country, and we are happy to share this video that honors his father’s legacy while calling on Congress and the White House to move forward with these contemporary civil rights issues. This MLK Day, the Kennedy Institute echoes the words of Dr King: “Voting is the foundation stone of political action,” and for all citizens, we support the ongoing work to secure voting rights for all citizens.