A day of hands-on civics designed for the youngest visitors

Kid Convention 2019 was a day of engaging hands-on activities for children and families where youngsters learned about the legislative process, government, and had some civics-centered fun.

In the Institute’s replica Senate Chamber, kids played What Makes a Good Leader? and discussed important leadership qualities, they identified community issues, and then saw their ideas come to life as Institute staff transformed into the candidates that the kids envisioned.

There was a kid polling station where even the youngest visitors were able fill out a ballot and tell us who they’d like to see as city councilors. Kid Convention delegates elected an organized environmentalist and a confident, hard-working housing advocate to be Kid Convention city councilors this year. The voters also passed two ballot questions, one to lower the voting age to 16 years old and one to make Election Day a holiday. There were also 24 excellent write-in candidates suggested who focused on issues ranging from education to helping the homeless and preventing violence.

One of the big draws was the Institute’s first-ever Presidential Pet Primary. Kids geared up for the 2020 election by casting their votes for the pet they thought should get the nomination for PPOTUS (Presidential Pet of the United States). And the results are in! Bailey Warren, pet to U.S. Senator Elizabeth Warren (D-MA) was the clear winner of the Presidential Pet Primary with Birdie Sanders (not an official pet to U.S. Senator Bernie Sanders (I-VT) and the dogs of former U.S. Vice President Joe Biden tied for second place. Bailey Warren ran on a platform of defending against animal cruelty. He is a very good boy.

All Kid Convention participants were also invited to consider a run for office in a scavenger hunt along the campaign trail. They created a campaign buttons and posters, made a stump speeches, and connected with potential kid voters.

Kid Convention 2019 was made possible through the generous support of the Martin Richard Foundation. 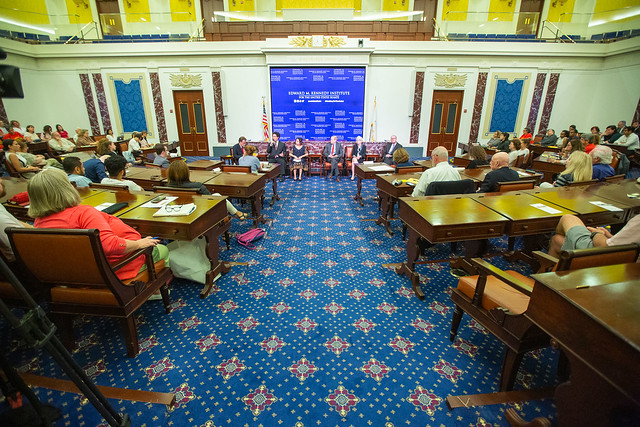