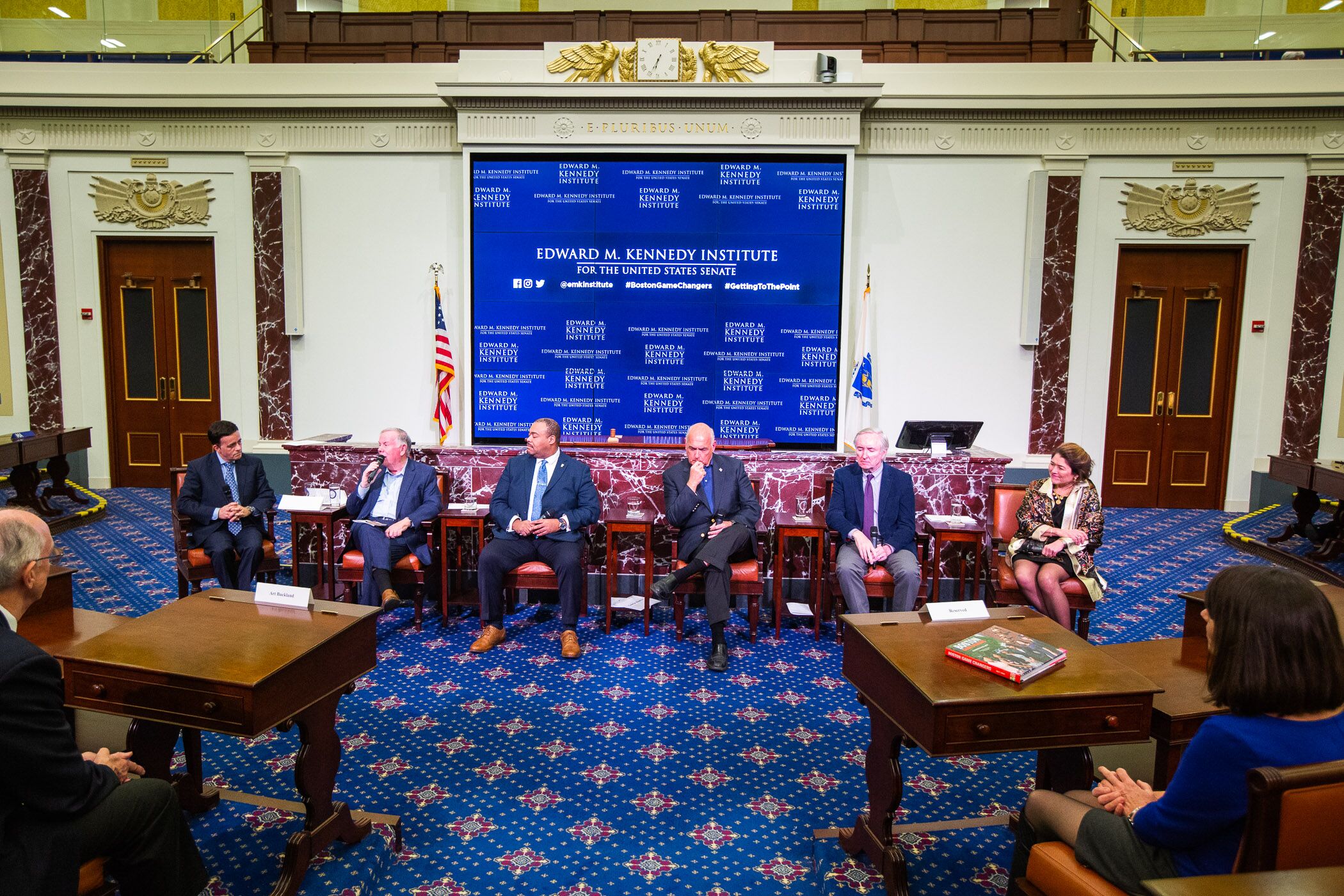 In January 2020, the Institute hosted award-winning photojournalist Bill Brett and four of his Boston Game Changers for a conversation on how Bostonians can affect positive change. Brett’s recent photography collection, “Boston: Game Changers,” served as the inspiration of the conversation, and attendees were treated to a lively discussion moderated by Jordan Rich of WBZ.

A Dorchester native, Bill Brett was inducted into the Dorchester Hall of Fame on St. Patrick’s Day weekend 2017 and is well-known for his long career at The Boston Globe. Brett has published five books in addition to “Boston: Game Changers,” all of which feature the city of Boston and its people.

Joining Bill and Jordan for the conversation were Boston Police Department commissioner William Gross, a long-time friend of Brett and the first African-American commissioner; George Montilio, owner of Montilio’s Baking Company that has baked presidential cakes; Dr. James O’Connell, director of the Boston Health Care for the Homeless Program that provides direct care on the streets; and Grace Cotter Regan, the first female president of the all-boys Boston College High School.

The desire to provide opportunity and make a difference was the common theme of the discussion. The Game Changers also shared their backgrounds, love for the city of Boston, and admiration for the people working to make Boston a better place –– many of whom were in the audience. A light reception followed the program where attendees and Game Changers mingled, Bill signed copies of “Boston: Game Changers,” and everyone left the Institute feeling more positive and prouder of the city that we call home.

As we continue to battle the ongoing coronavirus pandemic, the Game Changers we welcomed in January have pivoted their work to help those affected. Commissioner Gross is ensuring his force has the appropriate PPE to continue to keep the city safe. Montilio’s Baking Company has donated homemade pizzas and sweets to the South Shore YMCA’s emergency shelter and emergency child care centers. Dr. O’Connell and the Boston Health Care for the Homeless Program have opened several field hospitals, testing sites, and an isolation unit for those with coronavirus. Although BC High is temporarily closed, President Cotter Regan continues to lead and build community from afar. Join us in thanking them –– as well as all of the first responders and essential personnel –– for their continued service in this trying time.

At the forefront of civics excellence