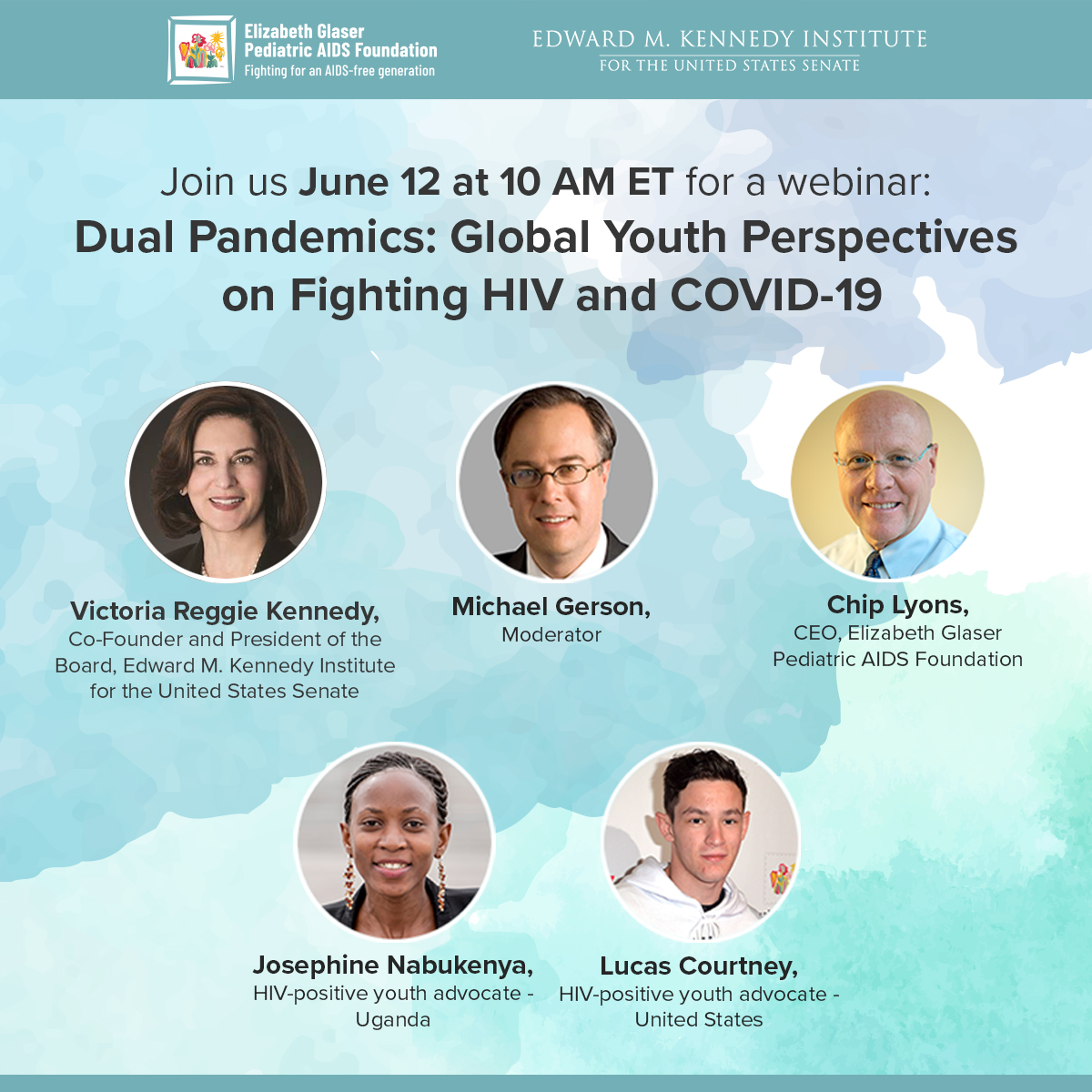 On June 12th, the Elizabeth Glaser Pediatric AIDS Foundation (EGPAF) and the Edward M. Kennedy Institute for the United States Senate hosted the webinar “Dual Pandemics: Global Youth Perspectives on Fighting HIV and COVID-19.” Victoria Reggie Kennedy, Co-Founder and President of the Board of the Kennedy Institute, opened the panel discussion by sharing that the fight against HIV and AIDS was an issue close to the heart of her late husband, Senator Edward M. Kennedy. His efforts were pivotal in creating the Ryan White CARE Act and the President’s Emergency Plan for AIDS Relief (PEPFAR), both of which have been instrumental in the fight to end AIDS in the U.S. and around the world.

Watch the webinar recording below:

“People of conscience are rallying around the world to raise awareness and protect vulnerable communities” during the coronavirus pandemic, said the webinar’s moderator Michael Gerson, an architect of PEPFAR during its design, and a Washington Post Columnist. He welcomed panelists Josephine Nabukenya from Uganda and Lucas Courtney from Boston, Massachusetts in the U.S. Gerson asked the panelists, both EGPAF Ambassadors and youth activists living with HIV, about the particular challenges young people with HIV face as we battle dual pandemics.

For Josephine, a main challenge has been a lack of access to healthcare without transportation during the lockdown in Uganda, as well as food insecurity. “You cannot take ARVs [HIV treatment] on an empty stomach,” Josephine explained, so “some young people have been skipping their medications because they didn’t have food.” She also noted that with the increase in unplanned HIV status disclosures as people stay in close quarters, there has been a related increase in gender-based violence.

While the situation has been different in the U.S., Lucas shared that COVID still brings additional challenges for him as a person living with HIV. “I know I have a compromised immune system, so I have to be extra cautious,” he explained.

Of course, living with HIV as a young person can be challenging even in less tumultuous times—but Lucas shared that he has seen stigma get better over the years as has helped his peers to learn more about HIV. He shared that disclosing your status “gets easier and easier each time you do it.” Josephine similarly shared, “information is very key. And at an individual level, everyone has a role to play.” Once everyone is equipped with the right knowledge, Josephine posited, “I think the community will be stigma free.”

Lucas has overcome stigma with the mutual support of his two siblings, who are also HIV positive. And Josephine offers support to her own peers living with HIV—these days, primarily through WhatsApp. Because life is bigger than one’s HIV status, they cover every aspect of life in their WhatsApp chats, “whether education, or financial literacy, or gender-based violence,” Josephine explains.

After taking questions from the audience, Mr. Gerson asked both of our youth activists how the general public can act as better advocates for youth living with HIV.

“You can be a better advocate if you understand that HIV changes,” said Josephine. Today, young people may have more access to treatment—but they still need improved treatment that fits their needs and lives better.

EGPAF CEO and President Chip Lyons agreed, emphasizing that we need action from both policymakers and implementers in “making sure that those who have HIV or at risk of HIV, [are] among the highest priority populations in a COVID response.” Chip emphasized that for those from the U.S., one of the most important things that we can do is contact our members of Congress to advocate for this support.

With the proper funding, Chip explained, we can support the scientists working to end AIDS—as well as the inspiring youth activists around the world like Josephine and Lucas.