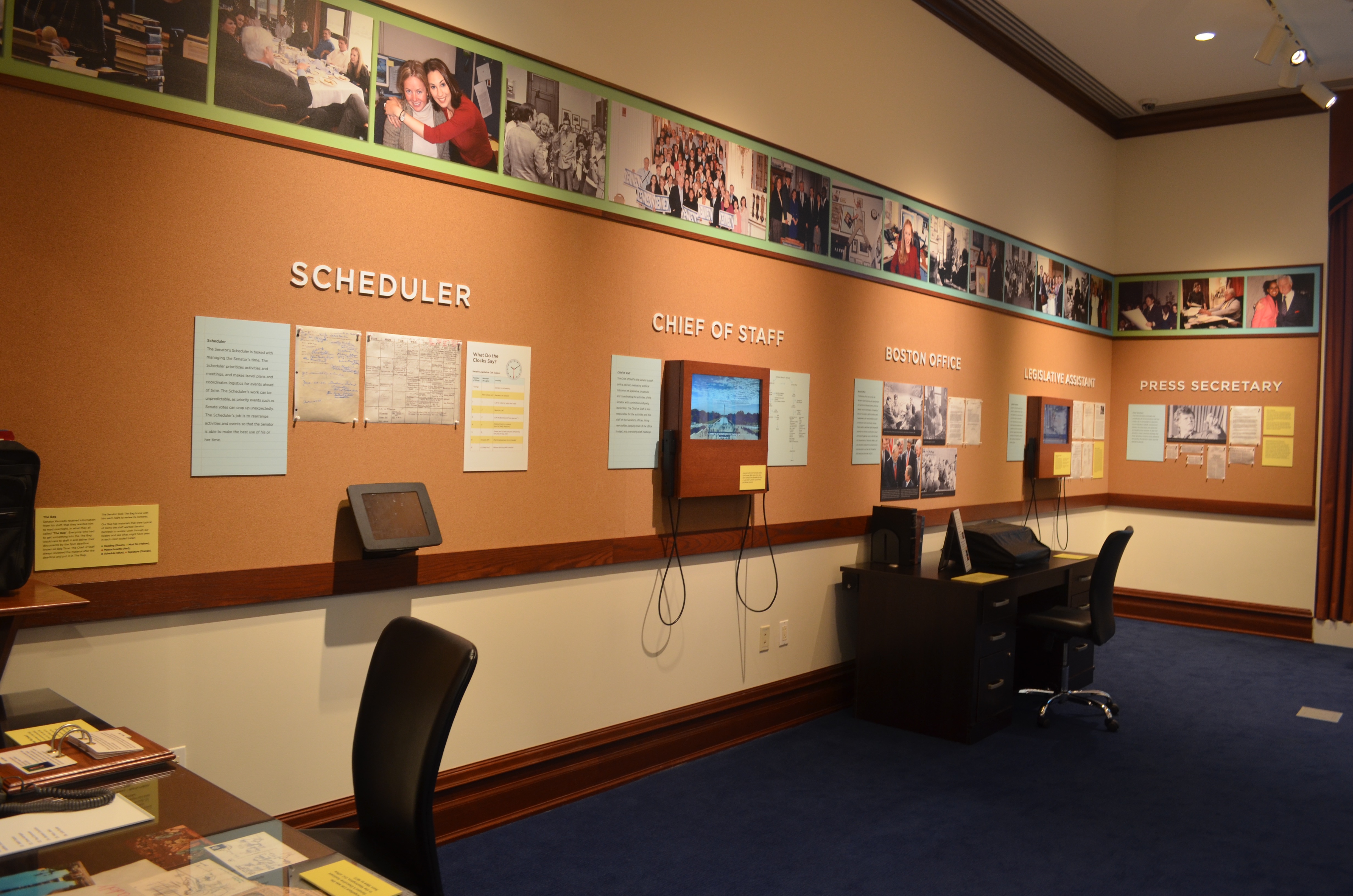 The year was 1975 and I was just 20 years old when I met Senator Edward M. Kennedy for the first time. I had just started my new job as administrative assistant to Mary Frackleton, the state director in the Senator’s Boston office. It was an unusual day in that I happened to be the only one there at 8:00 a.m. when Senator Kennedy walked in by himself. He smiled and said to me, “you must be new. I’m Ted Kennedy.” Then he came over and shook my hand before heading to his office. Soon after, the buzzer on my phone rang. The Senator asked if I could come in for a minute. I headed into his office where he then proceeded to ask me to make a call for him and rattled off the name, place, and phone number.

I hurried out, but got to my desk and had a decision to make: leave a note of resignation and bid farewell to my new job, pretend I made the call and say the line was busy, or go back in and tell the truth that I had not been able to make the call since I didn’t have a paper or pen to write anything down when I had hurried into his office. I chose the latter and knocked on the open door. Senator Kennedy peered up over his glasses and motioned me in. I explained, “Senator, I am so sorry, but I didn’t hear a word you said.” He smiled, laughed, and replied, “No problem.” He rattled off the information again and I went on my way. It may seem like an insignificant story but, for me, it was a major lesson and an introduction to the kind of person I would have the privilege to work for during the next four years.

Senator Kennedy was kind and caring to all of his staff members. He was the first to offer help if a staffer had a sick relative who needed the best medical care. He thanked staffers for their hard work often through photos from a bill signing with a personal message written on each one. He sent postcards to us when traveling abroad and, for those of us lucky enough to work in the Boston office, would offer a special treat of sailing on his beloved sailboat once a year. These are just a few examples of the things he went out of his way to do for the people that made up his highly regarded staff. On Capitol Hill, they were often referred to as the best and the brightest.

I look back 45 years later with an even better understanding of how those years influenced my life and led to a career in government. The position I held, while lower on the totem pole, allowed me to work in many different areas. I interacted with Connie Lambert, my counterpart in the D.C. office, as well as with many of the staff there who focused on legislation and public policy issues. I had contact with Kennedy family members and, of course, worked closely with the Boston staff who skillfully handled thousands of constituent requests and others who focused on Massachusetts issues that would often be passed on to the D.C. staff for legislative action. It was an invaluable experience.

I reflect now and, without knowing it then, also realize I was a witness to history. I worked during the tumultuous years of busing in Boston like when a very vocal anti-busing group took over all of the congressional offices in the John F. Kennedy Federal Building and refused to leave until they were able to meet directly with their Members of Congress. I then sat in an all-day weekend meeting scheduled with Senator Kennedy and took notes; no easy task since most of them were yelling and there were over 100 people the Senator patiently heard from in total.

In 1978, because I lived in the North End, I was the only staffer able to get into the office the day after the great blizzard of ‘78. The snowdrifts towered over me as I made my way through the deserted streets to reach the office and then, with elevators out of service, climbed up the 24 flights to the office. When the Federal Emergency Management Agency set up offices in the hardest hit areas of Massachusetts, the staff was sent out to represent Senator Kennedy at those locations. It was heartbreaking, but made us all feel good that we were there and able to offer help. Working in government is an incredible opportunity; not only for the insight into how it all works, but also because you can make a difference in people’s lives.

Another remarkable benefit it provides is the opportunity to collaborate with people on the staff. They are dedicated, diligent, and smart public servants which makes them interesting and, later on, often important people in their own right. You all work together, regardless of your position, for the common good. It is a true bonding experience. We still refer to it as a family. Anyone, young or old, should consider working for an elected official or maybe even run as a candidate yourself. It will be the best job you ever have.

After the Senator’s office, using all the experience I had gained on his staff, I went on to work for Governor Michael Dukakis, Secretary of State Michael Connolly, the Massachusetts Office of Travel and Tourism, and, finally, the Joint Committee on Tourism, Arts and Cultural Development at the Massachusetts State House.

In 2008, when the Edward M. Kennedy Institute for the United States Senate was just getting off the ground, I was offered the position of alumni relations manager. I didn’t have to think twice before accepting. I have now been with the Institute over eight years and am able to work with 1,000 plus former Kennedy staff. Many I know from the 1960’s and 1970’s, and many I have had the pleasure of getting to meet from more recent decades, which represent all 47 years of Senator Kennedy’s tenure. It is a real privilege.

So, Senator Kennedy, thank you for not firing me on that first day back in 1975 and allowing me to now have the opportunity to be at the institute that bears your name. I have truly come full circle. My first job and my last will be working for, and on behalf of, Senator Kennedy. There is no greater honor.